So apparently I’ve already done blackberries wrong in Seattle – I purchased them at a farmer’s market. Of course after I spent the money I was informed that they grow like weeds out here and that I could have probably picked the same amount (if not more) for free if I went out to one of the local parks. So expect more blackberry posts once the local blackberries are ripe.

locally grown, just on the other side of the cascades 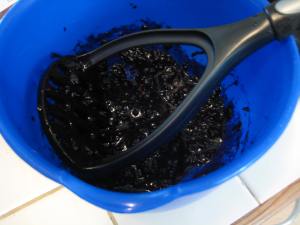 Good news! Potato masher works great on blackberries, not so great on blueberries as seen here. But fantastic on blackberries! Bad news, my finished syrup ended up being quite solid. I think it was from processing it in hot water to make it shelf stable because it was very liquid-y when I poured it into the jars. A couple of zaps in the microwave made it liquid again when it was time to eat.

Prepare for water-bath canning: Sterilize the jars and keep them hot in the canning pot, put lids in heatproof bowl.

In a medium heavy-duty saucepan, crush the berries with a potato masher. Add ¼ cup of water and bring to a boil over medium-high heat. Reduce the heat to medium low and simmer until the berries are very soft and juicy, about 5 minutes.

Set a fine sieve over a large measuring cup. Pour the berry pulp into the sieve and allow the juice to drip through. Gently press the pulp with a rubber spatula to extract as much juice as possible, but don’t press so hard that you force the pulp through.

Measure the juice and then pour it back into the saucepan. For every ¼ cup of juice add ¼ cup of sugar. Bring mixture to a boil over medium heat, stirring to dissolve the sugar. Reduce the heat to low and simmer until the syrup is syrup-y but still runny, about 1 minute. Skim the foam with a spoon.

Remove pot from heat and ladle the jam into prepared jars leaving ¼ inch headspace at the top. Use a damp paper towel to wipe the rims of the jars, then put a flat lid and ring on each jar, adjusting the ring so that it’s just finger-tight.

Return the jars to the water in the canning pot, making sure the water covers the jars by at least 1 inch. Bring to a boil and boil for 10 minutes to process. Remove the jars to a folded towel and do not disturb for 12 hours.

After 1 hour, check that the lids have sealed by pressing down on the center of each lid. If it can be pushed down it hasn’t sealed and the jar should be refrigerated immediately. Label the sealed jars and store in a cool dark place.